A growing number of scientists are concerned that the widespread use of Wi-Fi and Wi-Fi-enabled devices could be slowly making us sick. In this Catalyst investigation, Dr Maryanne Demasi explores whether our wireless devices could be putting our health at risk.
http://www.abc.net.au/catalyst/stories/4407325.htm


FOX News on WiFi in School: Parents are raising concerns nationwide about health concerns from wireless school networks. EHT’s Dr. Davis is featured in this news story where parents are advocating for safe wired technology in their local school system.
https://www.youtube.com/watch?v=fk17yuFwy7M&feature=youtu.be

Nationwide, parents are calling for “Safe Technology” in schools.

"The federal government has dropped the ball with wireless"
https://www.youtube.com/watch?v=Pa1ujVbDA1o&index=3&list=PL2TxgdaZ0lgAzCEhDOXmchknb1nmF06-s

Wifi in schools is not safe Sept 2015 Meeting
https://www.youtube.com/watch?v=vj1UZgmXtIU&list=PL2TxgdaZ0lgAzCEhDOXmchknb1nmF06-s&index=7

Teacher in Rhode Island compared effects of Wi-Fi in schools with concussions.
https://www.youtube.com/watch?v=QbgIdyhAXfM

Math teacher states WiFi in classrooms is worse than a cell tower and has measurements to prove it. Be sure to watch the ending where a Board members efforts to ask a question is thwarted by the Chair! 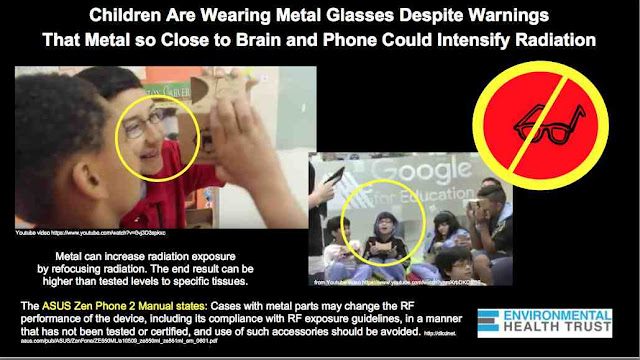 Posted by Parents for Safe Schools at 20:10 No comments:

As a Director of Children’s Health and Safety for the Citizens for Safe Technology Society (CST), I represent parents, teachers and students who are seriously concerned about the recent endorsement of the wireless virtual reality system called “The Global Expeditions Pioneer Program.” You may not be aware that the World Health Organization (WHO) has classified radiofrequency electromagnetic fields, as “possibly carcinogenic to humans” (Group 2B). Our children's health is at risk in our schools when they are forced to suffer prolonged chronic exposure to low levels of microwave radio frequency radiation from wireless devices.

The Google’s Expeditions Pioneer Program provides a free kit, which includes ASUS smartphones, and wireless tablet for the teacher to act as the tour director, a wireless Internet router and Google Cardboard headsets. Concerned scientists explain that cell phones are a two-way microwave radiation transceiver, which should never be used directly in front of a child’s eyes and brain. Professor Om Gandhi from the University of Utah, who is one of the original developers of testing wireless radiation from cellphones, has stated “We have never tested microwave radiating devices directly in front of the young developing eye. The absence of proof of harm at this point does not mean that we have evidence of safety.”
http://ehtrust.org/stop-untested-microwave-radiation-of-childrens-brains-and-eyes-eht-scientists-urge-google/

The health and safety information provided with the kit includes a list of warnings to the user when using this product. The risks identified include severe dizziness, seizures, epileptic seizures and other conditions of epilepsy. blackouts triggered by light flasher or patterns, and loss of awareness.

Further, the product warnings go on to say that this product should not be used when tired, needing sleep, under the influence of alcohol or drugs, are hung-over, have digestive problems, under emotional stress or anxiety, or when suffering from cold, flu, headaches, migraines, or headaches, as this can increase your susceptibility to adverse symptoms.


It is of great importance to note the following warning, " This product should not be used by children under the age of 13 as these children may be at increased health and safety risk. Adults should monitor children (age 13 and older) who are using or have used the Headset for any of the symptoms described above.”

In January 2015, MP Terence Young announced a multi-party support for his Private member’s Bill C-648 requiring manufacturers of wireless devices to place health warnings labels on the outside of the packaging.   Parents, teachers and students shouldn’t have to look for the buried warnings and disclaimers of the health hazards to their children before this technology is distributed throughout our schools.
http://www.c4st.org/PMB

According to a report delivered June 2015, by the House of Commons Standing Committee on Health (HESA) the microwave radiation from wireless devices is now a "serious public health issue".  The Canadian Parliamentary Committee discussed possible links between RF exposure and cancer, reproductive issues and autism. Concerns were raised about RF exposure in schools due to use of Wi-Fi; the need for RF exposure limits to protect vulnerable populations such as pregnant women, infants and children, and persons with electromagnetic hypersensitivity (EHS)


We are confounded as to why Health Canada has disregarded or minimized certain recent studies, such as links to cancer promotion, DNA damage, protein synthesis, stress response, and detrimental biological health effects in humans that occur at radiation levels far below the existing Safety Code 6 Guideline. During the hearings four international experts testified that Health Canada is "either unwilling or not competent" to judge current scientific evidence that wireless radiation is harmful to our health. Health Canada is not protecting the public.


The International EMF Scientist Appeal, signed by over 200 EMF research scientists, university professors and medical doctors from 40 countries, called upon the United Nations, the WHO, and the UN Member States to address the emerging public health crisis caused by indiscriminate use of microwave radiation emitting devices without safety precuations. Concerned scientists state that the enactment of the precautionary principle is past due, as a start to protect the general public, specifically children and the unborn.


"The Precautionary Principle states when there are indications of possible adverse effects, even just single cases, though they remain uncertain, the risks from doing nothing may be far greater than the risks of taking action to control these exposures.” This is a time when we call upon you in your role of Prime Minister, to take the prudent and wise step to protect children without delay, as it will be impossible to turn the clock back and unwind the damage caused in the days to come.


Given there is a serious health risk to our children we are calling on you as the Prime Minister and as a parent with three school age children to implement the precautionary principle and have this free product removed from our schools.
Sincerely,


Members of Parliament via email 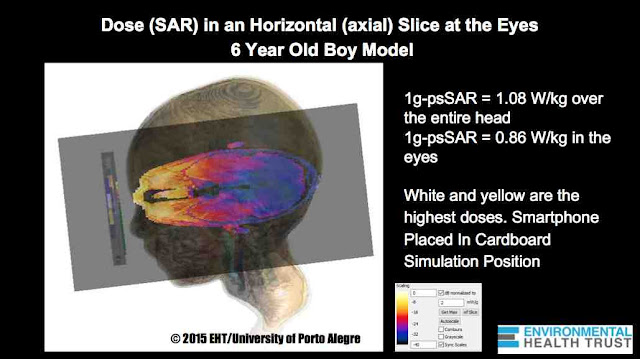 Must Watch!! Mobilize a documentary on the dangers of cell phone usage by children and adults 2014
https://www.youtube.com/watch?v=PaaHf15MjoM&feature=youtu.be

However, the Interphone Study Group did eventually acknowledge that "heavy users" of cell phones had an approximately doubled risk of glioma, a life threatening and often-fatal brain tumor, after 10 years of cell phone use. The most shocking part of their finding is their definition of a "heavy user" —someone using a cell phone for two to two and a half hours per month!

The family of “G,” a 12-year-old who attended the Southboro junior boarding school, says the boy suffers from a condition called Electromagnetic Hypersensitivity Syndrome, which makes him feel ill when exposed to wireless Internet signals. They argue in their complaint, which they filed in August, that the Fay School ignored their pleas to find accommodations for G, who was experiencing dizziness, headaches and other symptoms in class because of the school’s Wi-Fi.

Schools and Wi-Fi: Is Your Child Sitting Under This Radiation Emitting Device?

Is your child sitting in a classroom under this router? Schools with Wi-Fi have these devices (Wi-Fi access points) on the ceiling. Check out the radiation levels coming off them even when the child is not on a Wi-Fi device. 6 hours a day of this radiation in school. Did you know teacher unions were concerned? 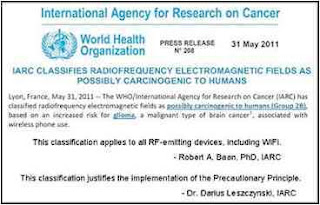 Posted by Parents for Safe Schools at 19:55 No comments: