City of Lakes Waldorf School took a courageous and perhaps prescient step in eliminating WiFi and going back to hardwired access to the Internet. The school chose to act out of concern for the health and will being of the students entrusted to its care.

Mobile Phones Health Hazards, Risks and Dangers
A surprising page at a Microsoft User Website about the dangers of cell phones and microwave radiation:

Dr Kerry Crofton - How Our Children can be Tech Savvy, Healthy, and Connected
http://www.youtube.com/watch?v=hyk2gsfoztg 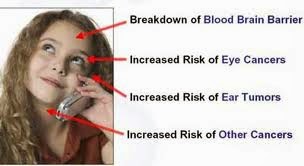 Posted by Parents for Safe Schools at 18:44 No comments:

Additionally, doctors are encountering a significant and growing number of people presenting with a range of acute (short-term) symptoms from wireless radiation, including headaches, palpitations, rashes, fatigue, sleep disturbance, allergies and memory and concentration problems.
http://ssita.org.uk/wp-content/uploads/2014/03/British-Doctors-Letter-March-2014.pdf

Cell Phone Chatter Linked to Triple Risk of Brain Tumors
The latest study, which analyzed 253 cases of glioma and 194 cases of meningioma reported in four French departments between 2004 and 2006, revealed that people who spend 900 hours on the phone during the course of their career are significantly more likely to develop brain tumors. 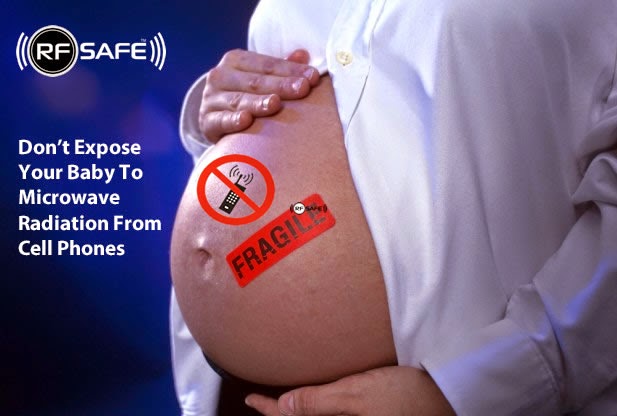 Posted by Parents for Safe Schools at 18:30 No comments: 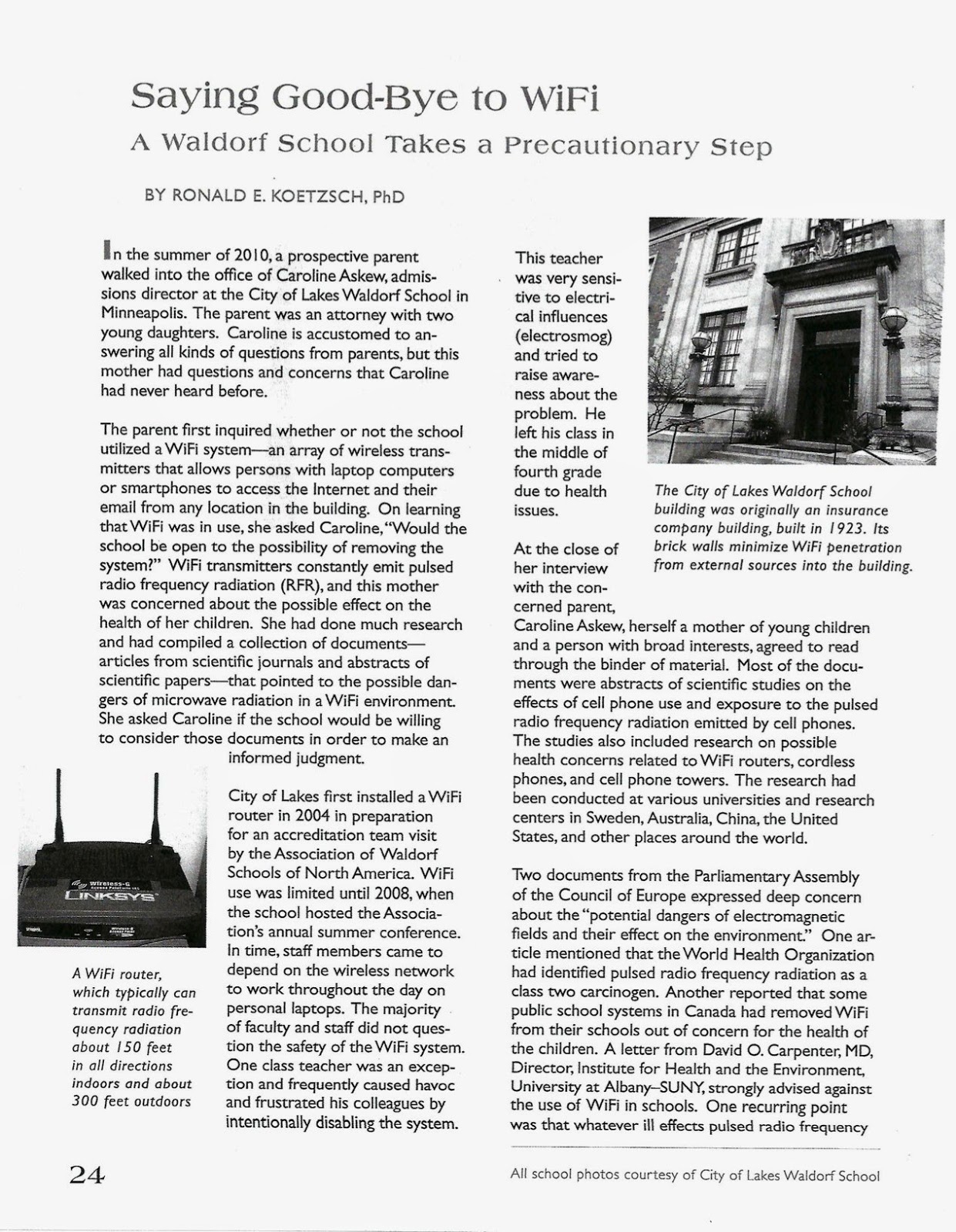 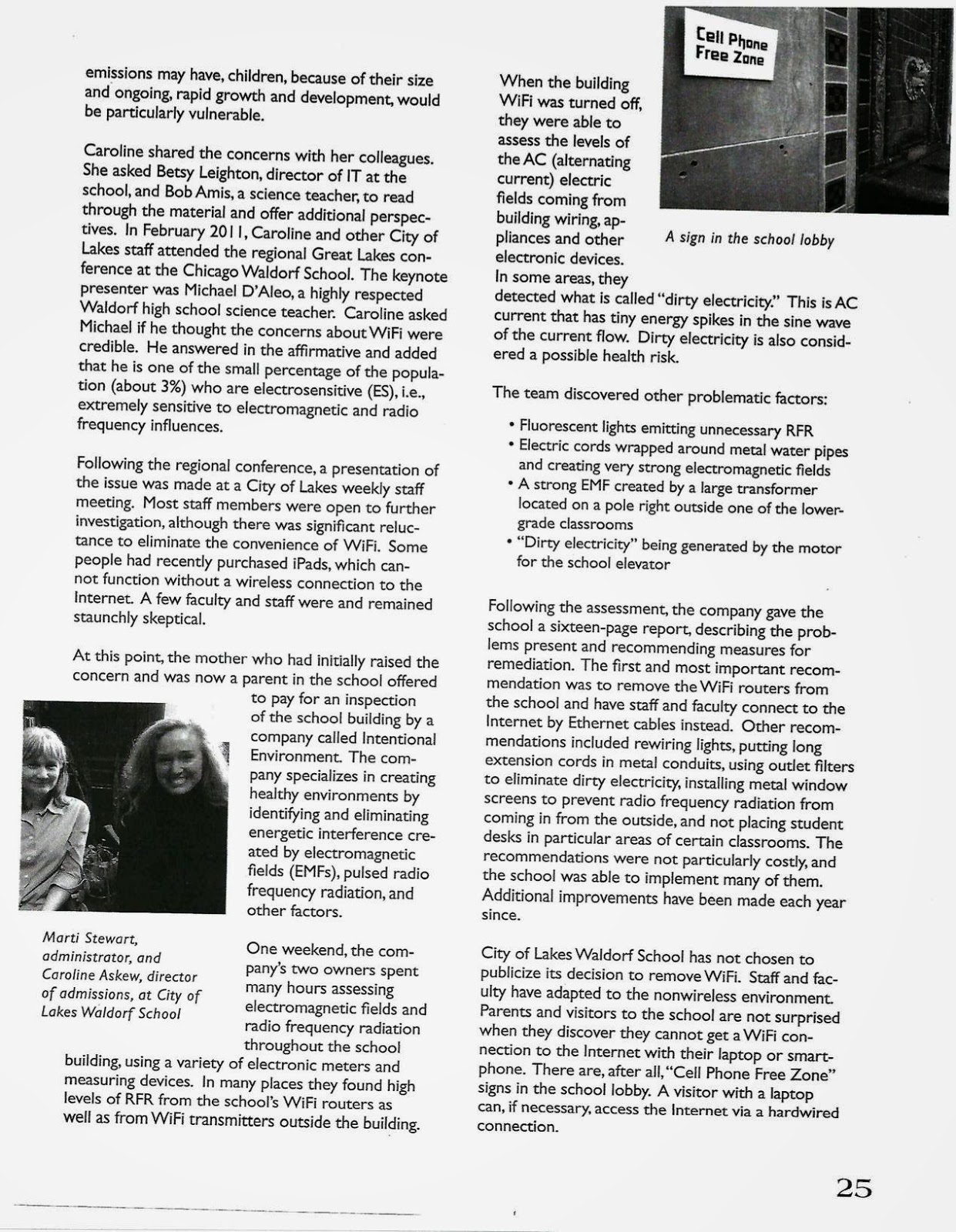 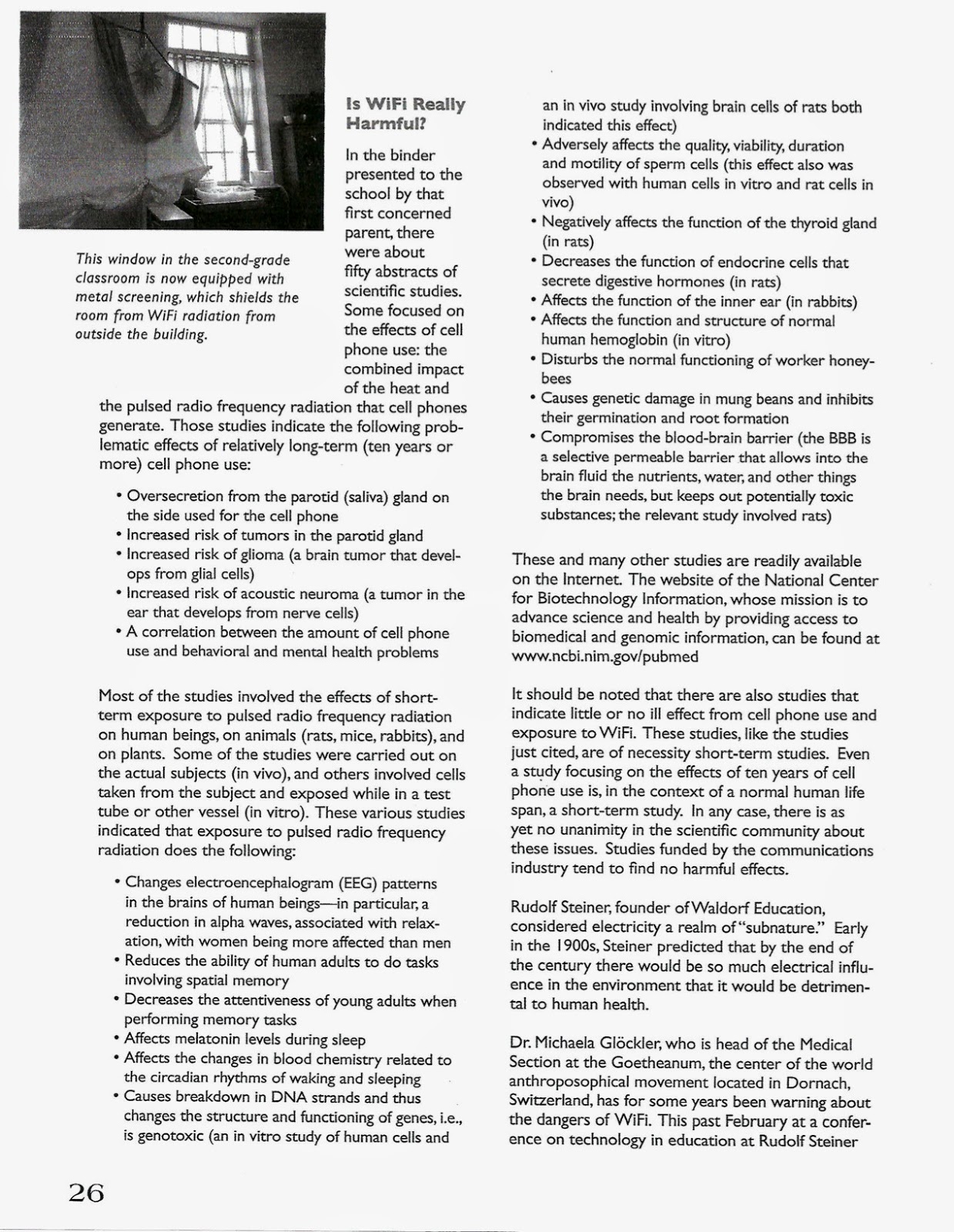 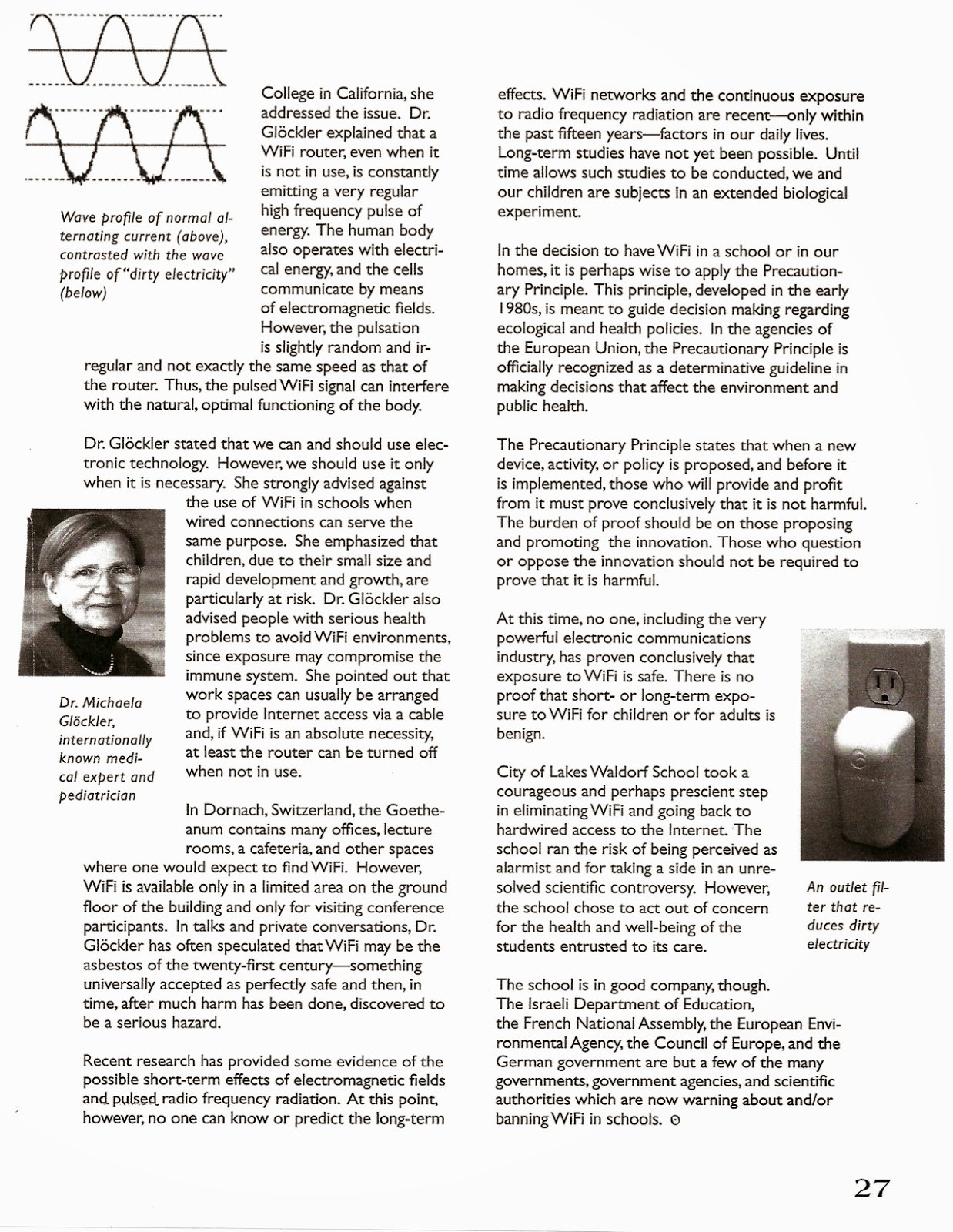 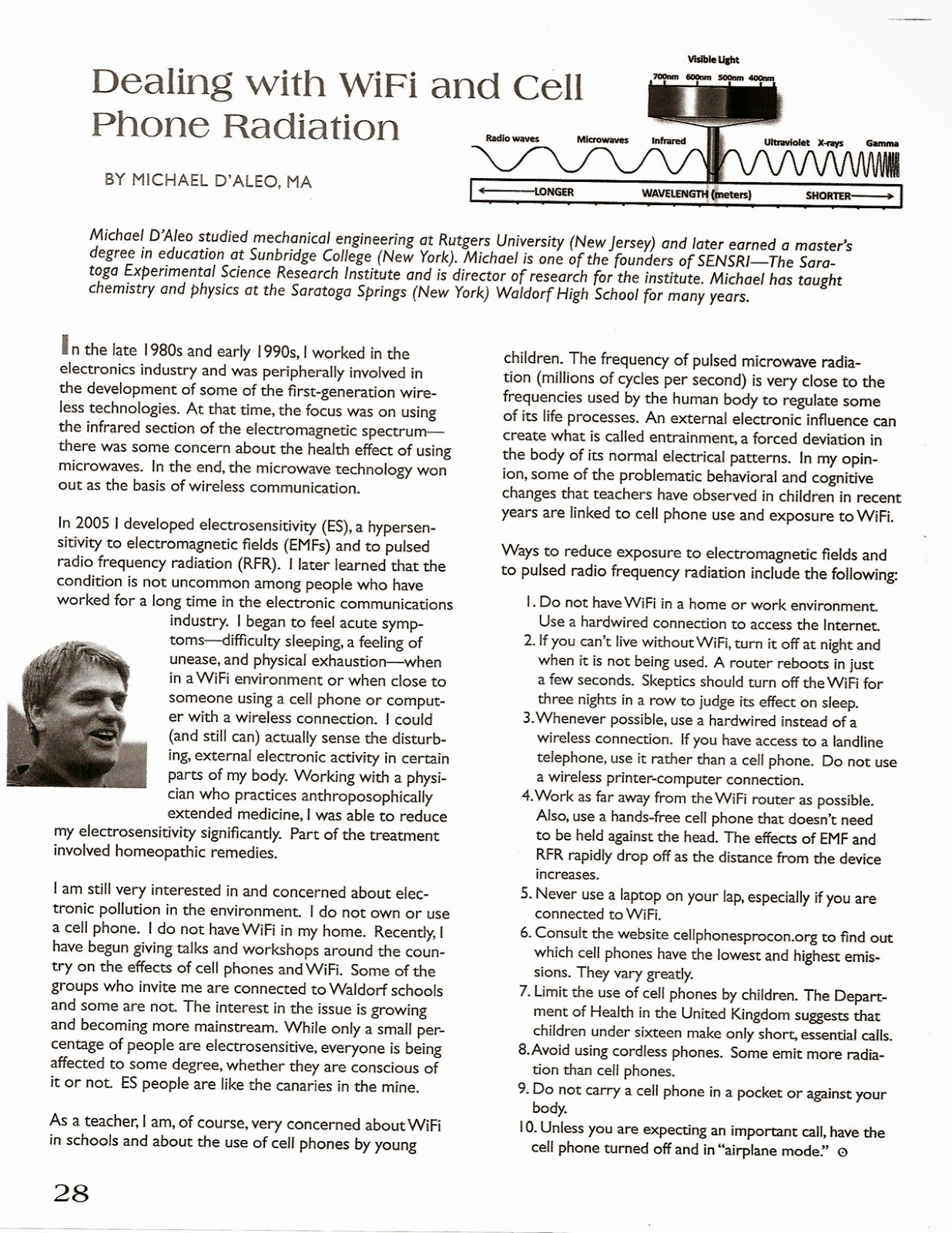 Posted by Parents for Safe Schools at 20:14 No comments:

The Occupational Health and Safety Regulations pertaining to restricted exposures in the workplace (schools) that is of great significance. I really don’t even understand how Wi-Fi is allowed in schools based upon these regulations. You will notice it states:

(1) “If a substance identified as any of the following is present in the workplace, the employer must replace it, if practicable, with a material which reduces the risk to workers: (a) ACGIH A1 or A2, or IARC 1, 2A or 2B carcinogen”.

It goes on to state:

(1) An exposure control plan must be implemented when

(a) exposure monitoring under section 5.53(3) indicates that a worker is or may be exposed to an air contaminant in excess of 50% of its exposure limit,

(b) measurement is not possible at 50% of the applicable exposure limit, or

(c) otherwise required by this Regulation.

(2)  The exposure control plan must incorporate the following elements:

(a) a statement of purpose and responsibilities;

(b) risk identification, assessment and control;

(3)  The plan must be reviewed at least annually and updated as necessary by the employer, in consultation with the joint committee or the worker health and safety representative, as applicable.

Clearly, according to OHS regulations, there is strict and comprehensive protocol to adhere to with any 2B carcinogen in the work/school environment. This would include regular RF monitoring for  levels. Please continue to bring this point forward as this is legally binding and school districts must adhere to these safety regulations or face liability issues.