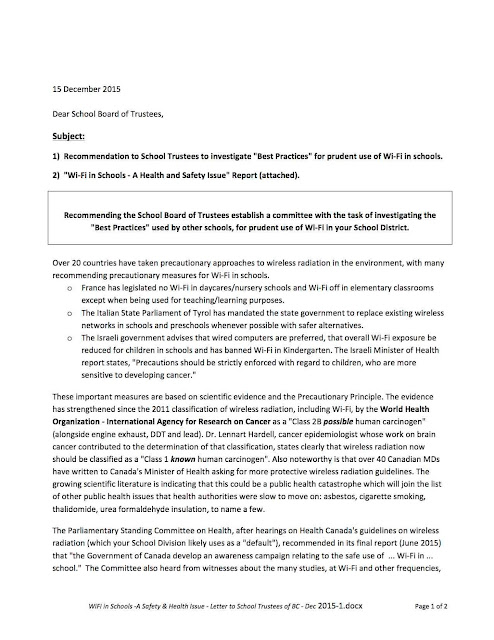 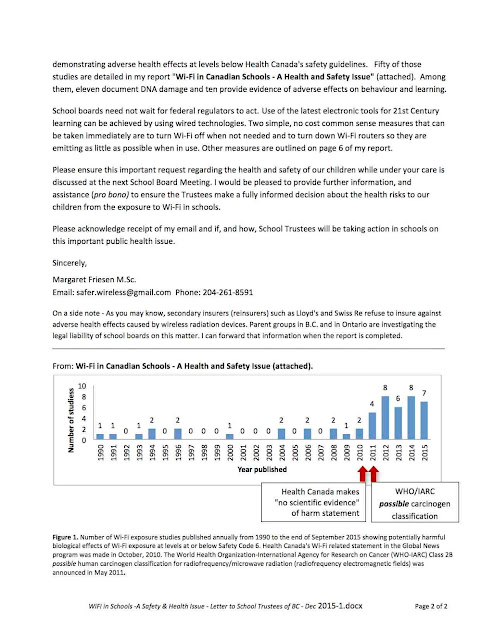 Posted by Parents for Safe Schools at 20:46 No comments:

Schoolgirl, 15, found hanged after 'developing an allergic reaction to the WiFi at her school'

Jenny - "I have no hope for humanity; we are destroying this beautiful earth as we speak. I am insignificant; an insignificant number on someone's screen and so is my life, a tiny blip in the whole existence of the universe. And I find it hard to be hopeful when I can hardly enjoy anything any more."
https://www.youtube.com/watch?v=6Ysr7cWu7fk


Dr. Erica Mallery-Blythe has dedicated this video to Jenny Fry, the 15-year-old girl with EHS who recently committed suicide by hanging. Her parents fought for over 2 years to have the wireless technology removed from her school.  Parent should not be forced to choose to whether to educate their children or safe guard them.
https://vimeo.com/131798243

Parents of boy with tumor want Wi-Fi out of school
New Zealand Dec 2013 - “Ethan was diagnosed with 2 brain tumors three months after he was given a WI-fi-connected iPod.  His parents later discovered he had been falling asleep with it under his pillow. Even though it was on standby, it was still emitting bursts of radiation as it tried to connect to the router, Mr Wyman said.
http://whyfry.org/boy-dies-of-brain-tumor-from-exposure-to-wifi-ipod/

Medical Experts are saying, 'There is going to be an Epidemic of Cancer'
Brain Cancer from Cell Phones, Pelvic Cancer from wearing your cell phone in your pocket or using your laptop or iPad on your lap - Presentations from Gabriel N. Seymour, Esq. David O. Carpenter, MD., Whitney North Seymour, Jr., Esq, and B. Blake Levitt
https://vimeo.com/17246275

Investigative Journalist For CBS News Exposes How Mainstream Media Brainwashes The Public
Sheryl Attkisson reveals how “astroturf,” or fake grassroots movements, funded by political, corporate, or other special interests very effectively manipulate and distort media messages. This is exactly what the wireless industry is doing to protect their investment.
https://www.youtube.com/watch?v=-bYAQ-ZZtEU 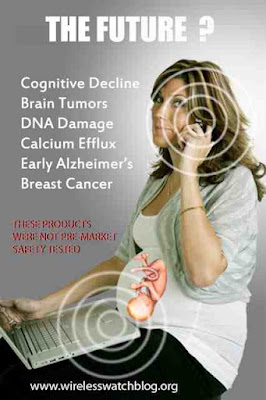 Posted by Parents for Safe Schools at 20:17 No comments:

Dear MP Murray Rankin,
As you know the 42nd Parliament is scheduled to reconvene on Dec 3rd.   Parents are asking MP's to support the Canadian Parliament Committee discussion on possible links between RF exposure causing cancer, reproductive issues and autism. Concerns were raised about RF exposure in schools due to use of industrial strength Wi-Fi; the need for RF exposure limits to protect vulnerable populations such as pregnant women, infants and children, and persons with electromagnetic hypersensitivity (EHS)

Health Canada has disregarded or minimized certain recent studies, such as cancer, DNA damage, protein synthesis, stress response, and detrimental biological and health effects in humans that occur at radiation levels far below the existing Safety Code 6 Guideline. During the hearings four international experts testified that Health Canada is "either unwilling or not competent" to judge current scientific evidence that wireless radiation is harmful to our health. Health Canada is not protecting our children.

In February 2015, Lloyds of London officially reiterated its policy to exclude any liability coverage for injuries, “Directly or indirectly arising out of, resulting from, or contributed to by electromagnetic fields, electromagnetic radiation, radio waves or noise.”  (Exclusion 32)  This would include microwave wireless radiation emitted from the commercial grade Wi-Fi transmitters and the multiple wireless devices.

The BC Ministry of Education in a letter addressed to the BC Confederation of Parents Advisory Councils (BCCPAC) November 19, 2012, states the decision to approve (or not) the installation of WiFi technology in schools was to be made by School Boards - not the government, writing "the Board of Education has the authority to develop policies addressing the use of wireless technology in schools and to implement the appropriate technology where it is deemed necessary to support the education needs of students". This position taken by the government places the onus and thereby all liability of risk on the shoulders of school districts.

  examine or cause examinations to be made as to the general health of students of the schools in the school district when required by the Minister of Health to do so [section 91(1)]; and

  report to the Board if the Officer considers that the health condition of any student is such as to endanger the health or welfare of others [section 91(2)].

Under no statutory or policy provision does there exist any grant of authority by the School Medical Officer to independently determine if electromagnetic fields, electromagnetic radiation, radio waves or noise constitutes a general health risk.


Vancouver Island School Medical Officer Dr. Stanwick has stated: Upon review of the evidence, the prevailing position in this province from experts at the federal, provincial and regional levels is that the evidence reveals that “Wi-Fi exposure in schools does not pose a level of risk that is unacceptable.” The other chief medical health officers in the province, Provincial Health Officer, Ministry of Health and other federal and provincial agencies hold this position.
The Provincial Health Officer, Dr. Kendall has stated in a letter in April 2015, “Nor, as others have suggested do I make statements that such radiation is 'safe' ”.

Dr. Kendall and Dr. Stanwick have been unable to provide the parents with even ONE peer reviewed study by a scientist or medical expert stating “exposure to microwave radiation is safe for children.”

School Boards with no educational background in the biological effects of microwave radiation, have decided for the parents without full disclosure or parental consent, it is now mandatory all children attending school, will be exposed to microwave radiation. Health Canada has provided School Officials with false statements about the safety of RF and robbed parents of their right to protect their children from this irreversible and permanent damage.
The burden of proof should not be put upon the public to prove that it’s unsafe, but upon the industry to prove it is safe.
All children have the right to access public education in a safe learning environment free of known carcinogens, especially when safer hard-wired connections to the Internet already exist in the schools.
Parents, teachers and children are counting on you to support the necessary changes to Health Canada’s guidelines and put an end to the suffering from the mandatory exposure to commercial wireless technology.

We are hoping you can find some time to meet with us to discuss our concerns.  Please find the C4ST fact sheet attached.

Cancer Officially Number One Cause of Childhood Deaths in US
The top two childhood cancers are leukemia and cancers of the brain and nervous system. Studies have linked both EMF exposure and childhood leukemia. Belgium just banned cell phones specifically designed for children up to age 7 based on this risk.
This risk can be reduced by using hard wire connections to the Internet!

Father Tells His Story: Children's Heart Problems Began After Wi-Fi Installed in School
Watch father Rodney Palmer tell the story of his child and wifi in school. For two years he and other parents worked to raise this issue after children began getting sick.  In this school, wifi was installed and kids got sick. Several kids were wearing 24 hour heart monitors, several had serious cardiac incidents and many kids were getting headaches.

Risks regulations and liability around exposing people and students to wireless technology EMF radiation – Part 1
The search for justice and compensation has led to various legal battles in recent times, with more and more cases being concluded with favourable outcomes. Consequently, individuals and businesses responsible for exposing other human beings to EMF radiation from wireless technology are becoming, or should be becoming, seriously anxious about their liability. The scope of this liability includes not only the way they are affecting the lives of those more sensitive to radiation, but also the harm that may be done over the longer term to those who are not presently so sensitive.

Scientists: Effects of cell phone radiation on kids is cause for concern
According to the National Cancer Institute (NCI), cell phones emit radio frequency waves, a form of non-ionizing radiation. Some compare it to holding a microwave to your head. NCI says tissue near where the phone is held can absorb that energy.

Protect children from EMF
One can only wonder why these institutions speak about potential “health effects” of RF instead of “health hazard”. The misuse of the term “health effect” completely neglects the fact that a physical/chemical factor could have either positive (beneficial) or negative (hazard effect). Probably, this is done by purpose not to alarm the general public about the hazard of use of microwave radiation in close proximity to the human brain.

Concerned About Electromagnetic Radiation? Practical Tips To Reduce Exposure
Author, researcher, and expert on electromagnetic health issues, Camilla Rees talks about some of what we do know now that is concerning and what steps we can take to reduce our exposure. 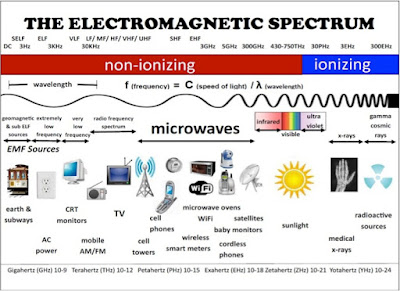