We must encourage precautionary measures, to limit EMF exposures, and to educate the public about health risks, particularly to children and pregnant women.  These exposures are a rapidly growing form of environmental pollution worldwide.


The Canadian Medical Association called out Health Canada for not doing its job of protecting the public and published a scathing condemnation of Health Canada's safety guidelines for cell phones, Wifi and wireless devices.


The article points out that Canada's Parliamentary Standing Committee on Health recently completed three days of hearings on Canada's safety guidelines, and sent federal scientists back to the office to re-examine 140 recent studies that show wireless radiation emitted by wireless devices can cause harm.

“I think part of the problem here is that the reassurances we keep getting from the manufacturers and distributors of WiFi – Rogers, Bell and whatever – and Health Canada are not sufficiently satisfactory, particularly for the possible risks to children,” Miller said


The teacher stated, “The students are having nosebleeds and the main offices are refusing to do incident reports. I have had two seventh grade students bleeding out of their ears.”


Is Wifi making your child ill?


Dr. Erica Mallery-Blythe “At the moment people think their children are safe because the router is far away – or we don’t have to worry about the phone because it’s not near the brain. That’s common sense but unfortunately we now know it’s not quite true,” she says, pointing out that the brain is better protected than some more vulnerable parts of the body. 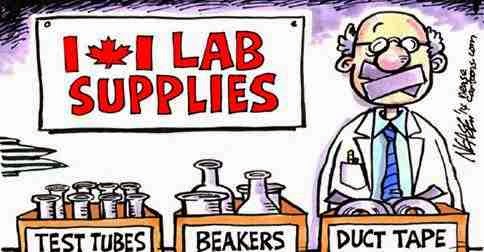 Posted by Parents for Safe Schools at 05:42 No comments:

Your iPhone could cause irreversible eye damage and even make you blind, researchers warn

The Parliamentary Health Committee has directed Health Canada to provide a FULL scientific monograph on the 140 studies showing harm we identified missing from Safety Code 6.
This is NOT the recommendations based on the recent hearings but an additional motion that passed last Thursday April 30th!
"It was agreed, — That the Standing Committee on Health direct Health Canada to provide detailed information in the form of a full scientific monograph on the reasons for acceptance or rejection of 140 studies on EMR submitted by Canadians for Safe Technologies with regards to Safety Code 6."

Parliamentary Health Committee (HESA) Investigation into Safety Code 6 2015  - Health Canada is NOT Protecting Us
Listen to three days of testimony from Scientist, Medical Experts and the Industry on the Health Effects from Microwave Radiation Exposure from Wireless Devices.  There is an overwhelming amount of evidence proving this exposure is hurting our children in school.

Your iPhone could cause irreversible eye damage and even make you blind, researchers warn

"Never before in human history have we exposed our eyes to light that is so intense, for such long periods, from such an early age," she says 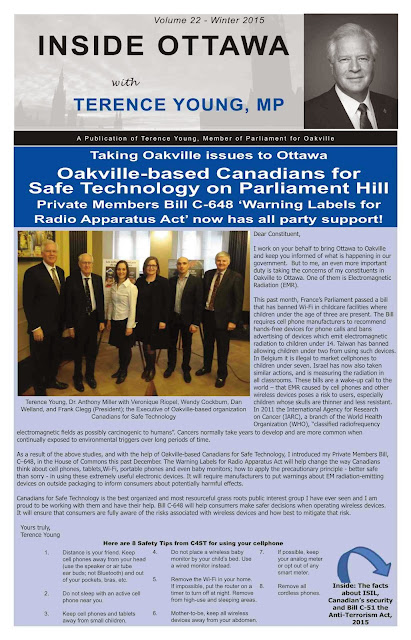 Posted by Parents for Safe Schools at 05:39 No comments:


Thank you for all the incredible support, it has helped me immensely. Could you please tell your readers that I thank them, and I that I have been trawling through their emails. I have read every one to date.  I have to stop replying for a while as I need to focus my work on Jodie's case tonight and also tomorrow. Jodie's Court appearance is tomorrow (Friday) and after it I will make time and reply to each and every one of you.

Please don't stop sending emails, I need them to keep coming,  keep sending any info, any critique. and feedback as it has really helped strengthen Jodie's argument and opened my eyes to EHS and it related syndromes.

I am currently working on getting pledges sorted and printed and Jodie will be coming in the morning to help me, keep the pledges coming.  We will give you, the Court and the media a grand total of the pledge support and let every one know what a group of like minded and compassionate people can do in rallying together in times of crisis and need.

By the way some readers have requested paying or depositing money in an account, please note that neither I nor Jodie have a trust account and we therefore cannot accept any money at all. There is no need to send any money, just pledges is what is required.

Thank you so much for everything, I am absolutely amazed at the amount of wonderful letters of support for Jodie, I can tell you all that before Peter and others became involved her batteries were becoming flat, but since everyone has banded together to help join her in this monumental fight she is now all charged up (excuse the pun) and no longer alone and isolated with her EHS.

On a final note, please feel free to bombard the media with your support for Jodie,  tell the world that she is appearing in the Supreme Court of Tasmania tomorrow at 2:15pm, please spread the word, the internet is such a powerful tool.

Lets show the world that EHS does exist.


Dear
Help is needed from your contacts and readers, please see below.
It is about time authorities realize that Electromagnetic Hypersensitivity Syndrome (NHS) is a real and legally recognised ailment. There is a case called McDonald v Comcare where EHS  was finally recognised by the Courts as an ailment in Australia. The McDonald case is authority that a person does not have to prove that Electromagnetic Radiation (EMR) actually harms them, they only have to prove that they have a reasonable belief that EMR will harm.

This is what formed her reasonable belief.
Jodie was diagnosed by three independent doctors and having EHS, one of them was the same doctor who gave evidence in the McDonald case. The Dr's also stated that if the tower is turned on it will cause serious health problems to Jodie and will also cause her home to become uninhabitable to her.
Further two electromagnetic experts conducted a joint survey in regards to Jodie's symptoms and exposure to EMR from a separate tower that was operational and emitting EMR in another area, it was noted in the report that she suffered detrimental health symptoms at the exposure to the EMR from that tower and concluded that the proposed NBN tower neighbouring her land if turned on would be a probable hazard to her health.

The law says that a person has the right to the use and  enjoyment of their land without any interference from neighbours. NBN Co has designed and constructed a device with the clear intent to pollute its neighbours with EMR.

Section 3 of the Environmental Management and Pollution Control Act states that EMR is a pollutant and that the emission of a pollutant onto neighbouring land is a nuisance if it interferes with the use and enjoyment of land. The Local Government Act states at 201 that the General Manager of the Council  (Huon Valley Council) may abate a nuisance if "there is immediate danger to any person or property".

We will argue that the Council has a duty to protect Jodie from pollution (EMR) that interferes with her enjoyment of her land. Even though in this case the Council decided not to abate, they did so at their own peril, because the duty still exits, and Jodie may possibly include the Council in a suit for negligence if the tower is turned on if she is forced to leave her home and is injured by the EMR.

Not only does the Council have a duty to protect Jodie, but now because it is in legislation, the Court also has a duty to protect her.  That is why I am seeking an injunction to permanently restrain NBN from turning on the tower or pulling  the EMR trigger.

Clearly Jodie is in immediate danger, if I may use an analogy to explain: Imagine a neighbour is building a large machine gun, bolted securely to the ground,  aimed directly at your home, it is in full view of you, you see it every day, then one day you see the neighbour load the gun with unlimited bullets and you are told by your neighbour that he/she intends to fire that gun at you and your house continuously, day in and day out, bombarding you for eternity with a hail of bullets,  you become extremely anxious and fearful that the neighbour is actually going to pull the trigger. This is the analogy I am going to use in the Court in regards to what NBN Co have done in constructing the tower and their intention to emit EMR every day onto Jodie's land on a permanent basis.

The tort of nuisance is a powerful legal  tool to use in Court. NBN Co have a duty to use their own property as not to injure their neighbour. That's the law. All Jodie has to do is prove that physical damage will occur to her land (contaminated with EMR to render uninhabitable), or injury to health such as headaches (EHS and Dr's report) etc which prevents her from enjoying the use of her land.

Michael Kirby Chambers
Posted by Parents for Safe Schools at 06:24 No comments: