GUARDS is an international coalition against global WiFi from space, a complex technology of radiation and toxic chemicals endangering all life on Earth
A special request from the international groups joining together to stop the LOON Project is below. This project is happening quietly and quickly, and once done will be very hard to undo. Please help by sending the press release below to your local newspapers, radios, MPs, MLAs and to anyone else you think might help spread the word. Your help is vital. I would suggest changing the title to “Congressional Corruption Threatens Canadian Health”.

Please take a moment to circulate the press release below to news media, environmental organizations, medical organizations, and even friends and family.  You can use the sample email below.  Directions for supporting GUARDS can be found at our website: www.stopglobalwifi.org on the Take Action page.  They include directions for how to file Informal Objections with the FCC, which is the only way to have input into the permitting process.  And, information to pass on to your Congressperson.  Congress is key to protecting our planet since only they can take the actions needed in the U.S.A.  One of which is to put the EPA in charge of protecting health and the environment, as the EPA tried to do in the past.  Right now the FCC is in charge of both promoting wireless technology and protecting your health from wireless technology, an obvious conflict.   A pdf of the press release can be found at: http://www.stopglobalwifi.org/documents/PressReleaseDec2015.pdf.
Thank you.

Dear Sir or Madam,
Please read the press release below.
Eight companies are planning to launch more than 11,000 satellites for global WiFi coverage - a microwave radiation based technology. An action group composed of citizens worldwide—Global Union Against Radiation Deployment from Space (GUARDS)— contends that these projects, which include projects by SpaceX, Facebook, and Google’s Project Loon, violate important human rights conventions due to the serious detrimental biological effects and non-consenting exposures which will result. This global union contends that decades of congressional corruption has resulted in a lack of protections to the public.
Thank you for your attention to this important issue.

Technology, aerospace, and telecommunications corporations are all rushing to saturate the planet with microwave radiation—a class 2B carcinogen. Microwave radiation is the invisible platform that allows modern wireless devices, including cellphones and WiFi to communicate. Microwave (MW) radiation is part of the radio frequency (RF) portion of the electromagnetic spectrum.

A citizen action group—Global Union Against Radiation Deployment from Space (GUARDS)—contends that these projects, which include projects by SpaceX, Facebook, and Google’s Project Loon, violate important human rights conventions due to the serious biological effects and involuntary nature of exposures. Catherine Kleiber, a GUARDS member, put the blame squarely on the US House and Senate: “Congress, under pressure from industry lobbyists ended EPA research into health effects of radiofrequency radiation and passed the Telecommunications Act prohibiting any state, municipal or citizen from questioning, objecting to or refusing any telecommunications project for health or environmental reasons. Our legislators could have said no but gave in to industry as usual.”

Projects to launch and replace thousands of satellites to provide worldwide Internet service will blanket the earth with harmful pulsed microwave radiation, destroy ozone and worsen climate change due to the emission of black soot from so many rockets. Combined with the detrimental environmental effects RF radiation has on both flora and fauna, including bees, these global wireless projects may lead to environmental devastation and even widespread starvation.

RF radiation limits are now the sole responsibility of the Federal Communications Commission (FCC), which is the subject of a recent report published by Harvard University’s Edmond J. Safra Centerfor Ethics—Captured Agency: How the Federal Communications Commission Is Dominated by the Industries It Presumably Regulates by Norm Alster. On February 7, 2014, in reference to these veryRF radiation limits, the U.S. Department of Interior (DOI) stated,

“the electromagnetic radiation standards used by the Federal Communications Commission (FCC) continue to be based on thermal heating, a criterion now nearly 30 years out of date and inapplicable today.” This is unfortunate for the American public, but not surprising, since the FCC is not a health and safety agency and has no in-house personnel qualified to research and set RF radiation safety limits.

In 1993, the Environmental Protection Agency (EPA) wrote a scathing criticism of the FCC’s proposed RF/MW radiation limits . In June 1995, the EPA announced to the FCC that it would be releasing its own RF/MW radiation safety limits in early 1996. An internal EPA memorandum regarding a meeting with the FCC and the NTIA makes it clear that the EPA was also initiating a process to develop initial regulations pertaining to chronic RF/MW radiation exposures and non-thermal RF/MW radiation effects within a two-year time frame. But, after industry lobbying, on September 13, 1995 the EPA Radiation Division that drafted the regulations was de-funded by the Senate Appropriations Committee, which also wrote, “The Committee believes EPA should not engage in EMFactivities”.

In 1996, telecom industry lobbyists succeeded in getting The 1996 Telecommunications Act passed. This Act prohibited states, municipalities and citizens from objecting to the placement and construction of wireless communications facilities (antennas) for reasons of health or the environment and assigned the FCC to be the sole regulator of “safety” related to wireless RF/MW radiation-emitting technology.

“It is time for Congress to take their responsibility to protect the health and environmental security of Americans seriously and to put the EPA in charge of setting RF radiation safety limits that will truly protect the American public. Congress must stop these dangerous projects that intend to irradiate the entire continent with RF radiation before they start. Non-wireless Internet and communication technologies are available and can always be improved.” said Marcey Kliparchuk a spokesperson for GUARDS.

In the culmination of a process begun in 1999, The National Institute of Environmental Health Sciences finally contracted in August 2005 to have toxicology research performed to assess the cancer risk and other biological effects of wireless radiation in lab animals. The results have still not been released years after completion of the research.

Over 200 scientists researching the biological and health effects of exposure to radiation from wireless devices and other sources of EMF have submitted a formal Appeal to the United Nations because“Numerous recent scientific publications have shown that EMF affects living organisms at levels well below most international and national guidelines. Effects include increased cancer risk, cellular stress, increase in harmful free radicals, genetic damages, structural and functional changes of the reproductive system, learning and memory deficits, neurological disorders, and negative impacts on general well-being in humans. Damage goes well beyond the human race, as there is growing evidence of harmful effects to both plant and animal life.”

GUARDS is an international coalition against global WiFi from space, a complex technology of radiation and toxic chemicals endangering all life on Earth.

Posted by Parents for Safe Schools at 16:01 No comments:

Do you still carry your cell phone in your pocket and leave it turned on?

New Study: Carrying a Cell Phone in a Backpack Leads to Blood Abnormalities

New research, reported in the journal of the Weston A. Price Foundation, Wise Traditions, January 16, 2015, shows the act of carrying a cell phone (smart phone) in a receptive mode in a backpack is sufficient to create disturbing changes in a person’s blood, without the cell phone being used.

Top medical experts advise schools to stop experimenting on our children. Wi-Fi in Schools is Risky Business that has never been evaluated for safety.

Devra Davis PhD MPH explains, “cell phone radiation has also been shown to damage brain development and just like lead we have no scientific documentation of a safe level for children. We are talking about the real possibility of a generation of children with irreversible brain impacts from cellphones.”  We know children’s skulls and bones are thinner, their brains and bodies contain more fluid so they naturally absorb more cell phone radiation than adults. The fear is that small impacts to children’s rapidly developing systems could have large impacts later in life.
http://www.naturalhealth365.com/brain-emf-radiation-1680.html

Do you still carry your cell phone in your pocket and leave it turned on?
This video should change your mind.

Polarization: A Key Difference between Man-made and Natural Electromagnetic Fields, in regard to Biological Activity

Industry affiliated scientists and “skeptics” often argue that we are surrounded by radiation from the sun and imply that it is the same as man-made microwave radiation. They try to confuse and confound lawyers, Commission panels, etc. who are unfamiliar with radiation of any sort. We know that man-made radiation is very different than the natural radiation to which all life was exposed from the beginning of times 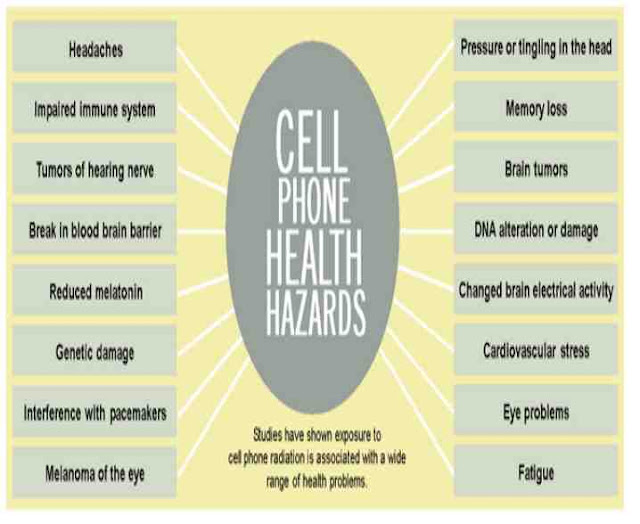 Posted by Parents for Safe Schools at 15:59 No comments: