Provincial Health Officer Dr. Perry Kendall has admitted he does not say Wi-Fi is safe.

Another Insurance Waiver for RF Radiation from Wireless Devices.
“Bodily injury”, “property damage”, “personal and advertising injury”, or “reduction in value” related to any actual, alleged or threatened exposure to, presence of, contact with, release of, escape of, or discharge of electromagnetic field emissions, radiation, or any related physical phenomenon, including, but limited to, the following:
a. Any supervision, instructions, recommendations, warnings or advice given or which should have been given in connection with the above
Document was provided by casualty insurer http://www.wrbmag.com/

Provincial Health Officer Dr. Perry Kendall has admitted he does not say Wi-Fi is safe.
Begs the question, then why has he approved the installation of wireless technology, a 2b Carcinogen, in our schools?

On January 29, 2015, the French National Assembly made history by passing a new national law to reduce exposures to wireless radiation electromagnetic fields.

The Potentially Detrimental Effects of Wi-Fi
"Long term exposure of 2.4 GHz RF may lead to adverse effects such as neurodegenerative diseases originated from the alteration of some miRNAs expression and more studies should be devoted to the effects of RF radiation on miRNAs expression levels."

Wi-Fi In Schools To Be Debated By Alberta Parents

Next month, parents across the province will have the chance to debate a resolution that could see control measures, such a installing switches that can turn off Wi-Fi in a classroom, or offering Wi-Fi-free schools.

Frank Clegg, CEO of C4ST, and past President of Microsoft Canada – July 2014
Talks about the masses of scientific research ignored by Health Canada in their review of Safety Code 6.

Winner of the Quebec, Grade 7 School Science Fair – Why-Fi
This project investigates the effect of microwave radiation on living cells by measuring and comparing bacterial growth from cultures of E. coli that were exposed to EM radiation for different periods of time. The ultimate goal is to shed awareness on the potential dangers of EMR emitted by household devices. 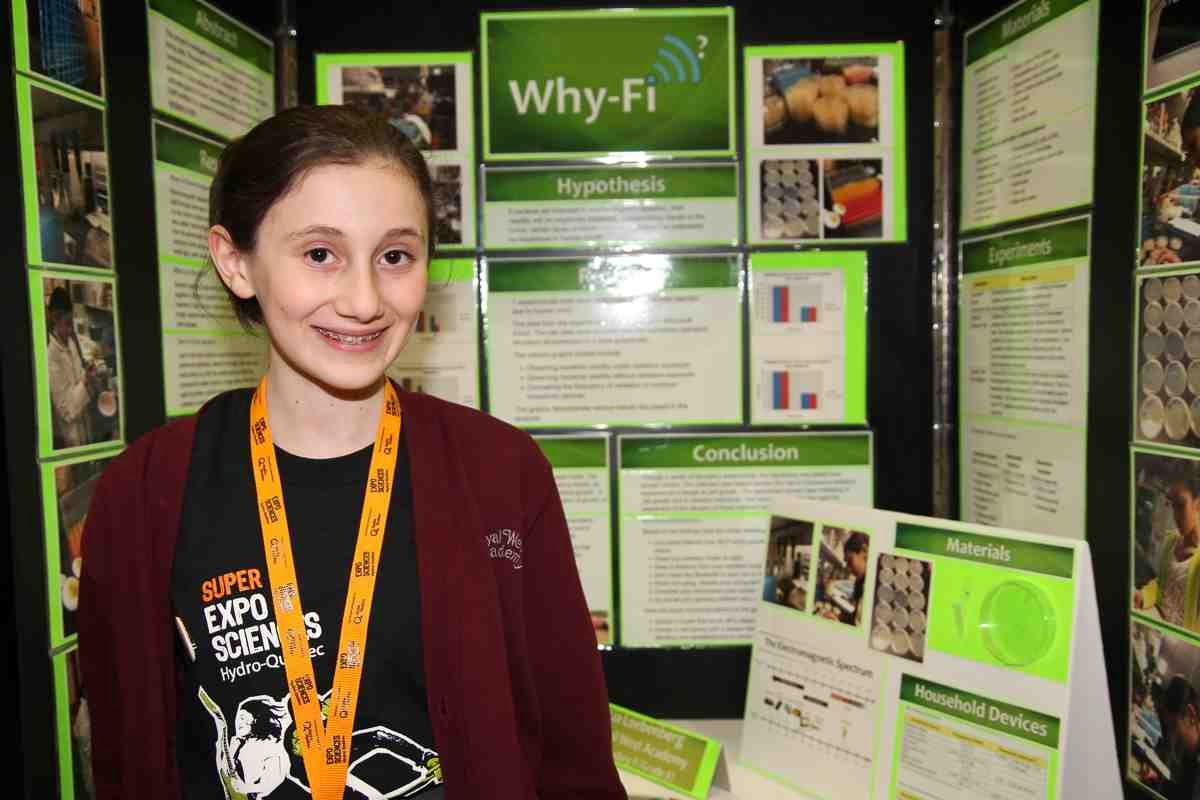 Posted by Parents for Safe Schools at 23:36 No comments: Links to this post

France: A Law To Regulate Exposure To Electromagnetic Fields
A section of the Act is devoted to the protection of babies and young children. Wireless devices will be banned in "the spaces dedicated to the care, resting and activities of children under 3 years" , that is to say, nurseries and daycare centers. As for primary schools (pre-school and elementary school) Wi-Fi will have to be disconnected outside "digital educational activities".

Meet the Medical Doctors and Scientists 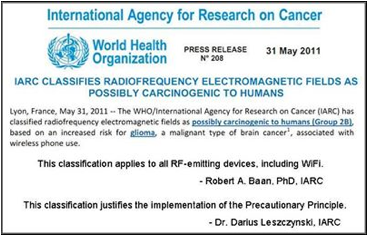 Posted by Parents for Safe Schools at 23:33 No comments: Links to this post

Provincal Health Officer, Dr. Perry Kendall says: Nor, as others have suggested, do I make statements that such radiation is “safe”.

Dear XX
Thank you for writing to express your concerns. I do not make decisions about having Wi-Fi installed in medical care facilities”. Nor, as others have suggested do I make statements that such radiation is “safe”.

Rather I state, as do many other scientific bodies, including most recently, the Royal Society of Canada Expert Panel, (the Panel) that ”the balance of evidence at this time does not indicate negative health effects from exposure to RF energy below the limits recommended in Safety Code 6.” This report is readily available on both the Royal Society and Health Canada websites.

The panel reviewed the evidence for a wide variety of negative health impacts from exposure to RF energy, including cancer, cognitive and neurologic effects, male and female reproductive effects, developmental effects, cardiac function and heart rate variability, electromagnetic hypersensitivity, and adverse health effects in susceptible regions of the eye.

The Panel did note that there are many additional studies ongoing and that it is possible that the findings of future studies may alter the balance of the evidence.

The overall conclusions are consistent with those arrived at by other review panels including the International Committee on Non-Ionizing Radiation Protection (ICNIRP), the Institute of Electrical and Electronic Engineers (IEEE).

and the National Collaborating Centre for Environment and Health (NCCEH).

I note also that Health Canada, on the basis of recommendations made by the Panel, as a result of recent dosimetry studies, is revising some frequency range exposure recommendations to ensure larger safety margins for all Canadians including newborn infants and children.

Dear Dr. Kendall,
I am writing to ask what evidence you are citing to inform provincial Health Authorities that electro-magnetic radiation, as emitted by Wi-Fi, is safe to be used in hospitals and long term care settings. From the studies I have seen in the past two years evidence seems to be pointing to the need to take precautions. Please see this report published in February 2015 from the International Journal of Oncology calling for a reclassification of RF radiation to a probable human carcinogen (2a). Here is the abstract:
http://www.spandidos-publications.com/ijo/46/5/1865

This is indicative of all the most recent independent studies showing adverse effects to living cells. Health Canada’s Safety Code 6, which you refer to constantly, does not even take into account biological issues. It was drafted years ago to set guidelines for thermal tissue heating. It is also a guideline developed for federal sites only where employees are not being radiated 24/7.
If indeed, there is no cause for concern, why are insurance companies redrafting their policies to eliminate coverage for claims against RF radiation?

It really is time for you and your colleagues in public health to relook at this issue like other international communities are doing.

Thanks for your time.
XX

Dear Dr. Kendall:
I’m very concerned about the introduction of additional Wifi to our health facilities. Here’s my reasoning:

1. As a scientist I’m concerned about the lack of credible evidence from independent sources as to the relationship between WiFi and health in general and between Wifi and health improvement specifically. Most people expect their health to improve as a result of a hospital stay. It would be horrific and costly if Wifi actually turned out to interfere with health recovery.

2. It appears that some public health officials believe that there is no evidence that Wifi is a threat to the health of the public. This may be true. But it is also true that there have been no studies about the impact on Wifi on people who have a variety of specific diseases, illnesses, or health issues that require hospitalization. So while there may be minimal evidence as to the negative impact on the health of the general public, it’s imperative that evidence be conducted or retrieved about the impact of Wifi on the health of those who require hospitalization.

3. As a person who has been hospitalized, I would be devastated if my loved ones and friends could not visit me in the hospital because of their own known and demonstrated sensitivities to the negative impact of WiFi. The evidence is quite clear that the support of family and friends contributes significantly to health improvement. If these people could not visit, it may mean longer (and consequently more costly) stays in the hospital as it might take longer for patients to recover.

4. The majority of people in society have little idea about what impact Wifi may be having on their health or general well-being. They think nothing of the hundreds of WiFi access points in public buildings and spaces. Consequently, it is not unusual that many people would be advocating for or wondering why there is no Wifi access in a hospital. But their enquiries or complaints about lack of Wifi in health facilities should not be taken as a signal that such electronic transmissions should be started.

Our hospitals ought to be beacons of the best health information and practice. Health facilities should clearly err on the side of caution when adopting any procedure. In addition, a hospital is an outstanding example, and should remain so, of how people are examined as individuals, diagnosed as individuals, prescribed as individuals, and treated as individuals. Adding Wifi for all violates one of the most cherished perspectives of individualized health care.

Hello Dr. Kendall:
Thanks for your prompt reply, and letting me know you are not involved in making the decision as to whether or not installation of WiFi in our medical care facilities is suitable.

One dilemma every scientist has with a “balance” of studies is whether a conclusion based on balance is a valid conclusion. Balance typically refers to studies that show a variety or sometimes contradictory outcomes with a preponderance of studies slanted in one direction. This does not negate the studies that resulted in a different, less popular or less prevalent, direction.

I don’t believe it is proper to make health policy based on “balance” of evidence as it does not take into account those findings that do not fit the balance or cannot be explained by the other studies. This can be a disaster for health policy.

You don’t make any mention of studies that contradict or came to different conclusions than the ones offered by the groups or panels you indicated. And how can we possibly be certain about setting exposure standards when they come from panels that could possibly have a conflict of interest.
And while the Panel “reviewed the evidence for a wide variety of health impacts from exposure to RF,” my concern wasn’t so much that RF “caused” or was associated with those difficulties as much as what impact RF has on those people who already have those difficulties.

Best wishes.
YY
Posted by Parents for Safe Schools at 15:07 No comments: Links to this post