Protect Children's Health - and yours- in a Wireless World 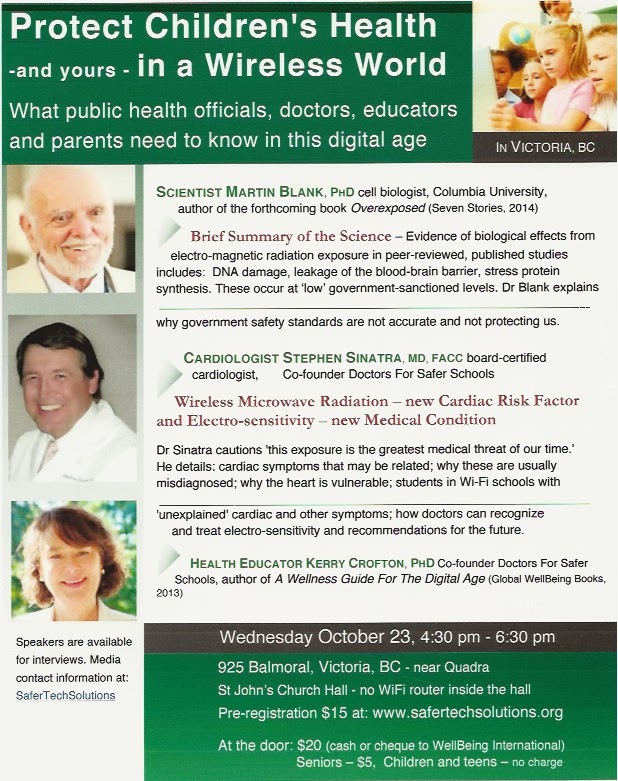 Posted by Parents for Safe Schools at 12:02 No comments: 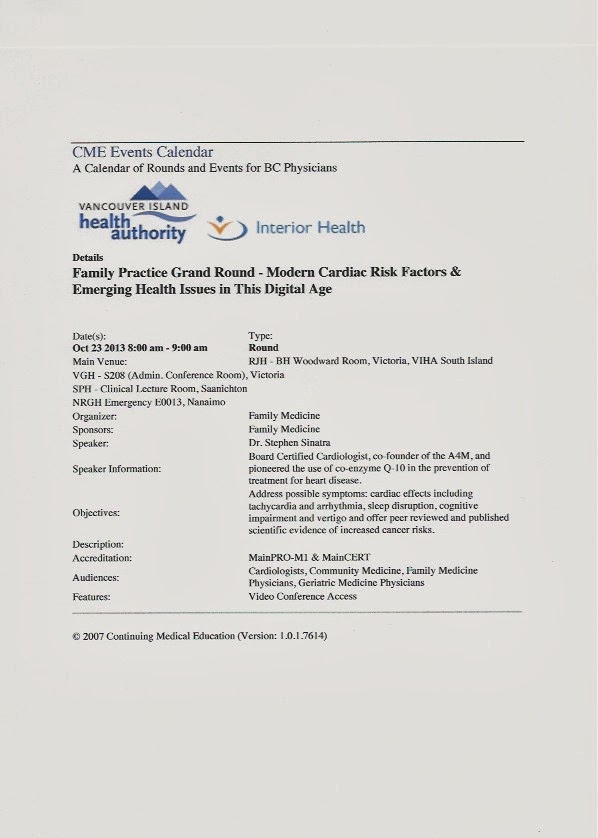 Posted by Parents for Safe Schools at 11:57 No comments:

Based upon recent findings, the BC CDC recommends that males keep cell phones away from the groin area and limit mobile phone use. The report confirms that there is consistent evidence that exposure to testes is associated with reduced sperm count, motility, concentration and altered cell structure.

In its report, “A Radiofrequency Toolkit for Environmental Health Practitioners.” released March 7, 2013, the BC CDC states that “the epidemiological studies of men assessed for infertility were consistent in demonstrating decreased sperm motility associated with increased use of mobile phones” and “biological effects on sperm motility related to RF Exposure”.

In the need to understand how harm is caused by exposure to microwave radio frequency radiation, the review panel noted that “oxidative stress seems one of the more plausible mechanisms of RF-induced sperm damage. Mechanisms by which oxidative stress is caused by increased ROS (/Reactive Oxygen Species) /and decreased antioxidant have been shown to exist in neurodegenerative diseases such as Parkinson’s and Alzheimer’s.” http://www.bccdc.ca/NR/rdonlyres/9AE4404B-67FF-411E-81B1-4DB75846BF2F/0/RadiofrequencyToolkit_v4_06132013.pdf

It is clear that our health agencies are still in the process of understanding risks from wireless technologies;  however, the findings of the BC CDC are consistent with those of many international experts who continue to warn that prolonged exposure to low levels of microwave radio frequency radiation from wireless devices, such as wi-fi, i-pads, cell and cordless phones and smart meters, can lead to serious health effects, especially for those most vulnerable in our society.

Citizens for Safe Technology Society applauds the BC Centre for Disease Control for this report, and continues to plead with our Provincial Health Officer, Dr. Perry Kendall, to take immediate action to first protect our children and youth with the immediate recommendation that schools and homes return to safe wired technologies.(letter from Una St. Clair is attached).

According to Sharon Noble, Director, Citizens for Safe Technology, in May, 2012, Dr. Kendall was presented with more than 150 studies on health effects due to RF exposure which he forwarded to the BCCDC to review.  "Dr. Kendall said that should the BC CDC  conclude there are risks to the public, he would use his authority under the public health act to make appropriate recommendations for the protection of our most vulnerable citizens.  Yet months after the report's release he has failed to publish any recommendations or even comment on it.  Neither has he revised the now outdated, misleading information on public health web sites. What is he waiting for?" Sharon Noble asks. "He knows that he has a duty to protect the health of all the citizens of BC.  We are mystified as to why he is failing to respond to this important report."

This BC CDC report, in concert with the 2011 W.H.O. classification of radio frequency radiation as a possible cause of cancer, must now prompt our health agencies to act without delay by implementing the precautionary principle to reduce the significant health risk to the public in general, with special focus on protecting the health of our children and youth today and for future generations.


Letter to Dr. Kendall that is waiting for a reply


This BC CDC report, in concert with the 2011 W.H.O. classification of radiofrequency radiation as a possible cause of cancer, must now prompt our health agencies to act without delay by implementing the precautionary principle to reduce the significant health risk to the public in general, with special focus on protecting the health of our children and youth today and for future generations.

Page 62, Section 5
“Whole body exposure at frequencies in the range of 80 to 180 MHZ and 1-4 GHZ to ICNIRP exposure levels may expose children and small persons (shorter than 1.3m) to above acceptable ICNIRP SAR levels.”

Page 138, Section 6B
“Mortality higher in RF-exposed groups than in control groups at SAR 0.5W/kg.”

Page 144-145, Section 6B
“Ferreira and colleagues exposed pregnant Wistar rats to 834 MHz RF signal for 8.5 hours from gestation to birth at SAR values of 0.55 – 1.23 W/kg or sham. At birth, the animals were sacrificed and an increased level of micronucleus formation was seen in the bone marrow of RF exposed versus sham—exposed animals.”

Page 260, Section 10
“The investigators found a dose-dependent response for all tested parameters including sperm motility and vitality. Decreased motility and increased levels of ROS were found in exposed specimens …..as a dose-response effect was found, it would seem there is biological and clinical relevance to their findings.”

Page 144, Section 6B
“On examination of brain tissue immediately after exposure, an increase in both single-  and double-strand DNA breaks were seen in the animals exposed to pulsed or continuous wave RF compared to sham-exposed rats.”

Page 157, Section 6B
“Research on effects on behaviour and cognition are mixed, with several studies showing that RF exposure has an adverse effect.”

Page 150, Section 6B
“Examination revealed increased permeation of albumin from capillaries into both white and grey brain matter in RF –exposed rats by comparison with sham-exposed animals, suggesting that exposure to pulsed RF fields at around 900 MHz increases permeability of the blood-brain barrier. They also observed an increase in “dark neurons,” indicators of neuronal damage in rat brains in animals exposed to RF fields.”

Page 165, Section 6B
“The results of the two studies, while quite “soft,” suggest that more attention needs to be paid to very long-term effects of RF-EMF. Although it is impossible to suggest a biologic mechanism which might explain the findings, results of both studies described above suggest that lifelong exposure to RF fields may shorten lifespan, perhaps in conjunction with other factors, at least in animals.”

Page 257, Section 10
“Mean sperm motility, viability and normal morphology showed significant adverse effects in the mobile phone user groups, both in men with normal and abnormal sperm counts. A dose-response relationship was found as the assessed semen parameters declined with increasing mobile phone use, independent of the quality of the original sample.”

Page 153 -154, Section 6B
“Analysis of tissue from the several parts of the brain, namely the prefrontal cortex, cerebellar cortex and dendate gyrus at three and 10 days post-exposure indicated elevated levels of GFAP, suggesting that the RF exposure was having a physiological effect, at least on astrocytic cells in the central nervous system.”

Page 152, Section 6B
“Sirav and Seyhan (2011) completed a similar study to their earlier investigation, again in Wistar albino rats, and once again found that the exposure to 900 or 1800 MHZ RF fields for 20 minutes promoted a  significant increase in albumin in the brains of male rats by comparison with sham-exposed animals.”

Page 154, Section 6B
“Bas et al (2009) exposed Wistar rats to continuously modulated 900 MHz GSM signal (SAR 2.0 W/kg) or sham for one hour per day for 28 days and found a significant decrease in pyramidal cells in the brain of the exposed rats by comparison with sham-exposed animals. Pyramidal cells are thought to play an important role in cognitive functioning.”

Page 259, Section 10
“Sperm motility and viability were negatively affected by exposure to RF.”
Page 275, Summary, Section 10
“The balance of all evidence, animal and human, is consistent with the assertion that exposure of the testes to mobile phone RF may be associated with decreased sperm count, motility, concentration and altered morphology.”

Adverse Effects identified, Mechanisms of Harm suggested
Page 272, Section 10
“Overall, oxidative stress seems one of the more plausible mechanisms of RF-induced sperm damage. It has been found fairly consistently in human and animal studies on sperm specifically and on other cells in general. Mechanisms by which oxidative stress is caused by increased ROS and decreased antioxidant have been shown to exist in neurodegenerative diseases such as Parkinson’s and Alzheimers.”

Page 269-270, Section 10
“Non-enzyme antioxidants, like melatonin, have also been observed to decline after RF exposure 62-65 An additive effect may occur, with alternation not only of sperm cell enzymes but of whole body system antioxidants. Melatonin in particular is known to support antioxidant activity in sperm. 66 A number of recent studies have provided experimental evidence suggestive of an oxidative stress mechanism for the effect of RF on sperm.”

Page 270, Section 10
“It was determined that the ROS were sourced from the sperms’ mitochondria. At a SAR of 2.8 W/kg, the results became statistically significant for mitochondrially produced ROS. They noted specifically that rapid change occurred at low SAR exposures which reached a plateau when about 30% of sperm affected.”

Page 263, Section 10
“Most, although not all studies attempting to control temperature, convincingly ruled out a thermal effect.”

Page 273, Section 10
“It is known that RF can induce currents in a cell membrane, and that this may alter the cation (positive ion) distribution (and so charge) in the normally negative membrane. Some evidence shows pulsed RF can dislodge calcim ions (Ca++) from a membrane, resulting in a weaker barrier and leakage, although there is no direct evidence on sperm membranes. However, studies do seem to point to efflux of Ca++ as a factor in altered sperm motility.”

Wireless devices are currently mandated and therefore proliferating at rapid speed throughout schools and public spaces where children cannot avoid long term chronic RF exposure.
Supporting the use of IPads, tablets, laptops, smartphones and other wireless devices by children in schools, which may be held against the abdomen for periods of time, must be quickly discouraged given strong evidence of fertility damage at the very least.

Page 342, Section 13
“Although not using the phone next to the head may reduce exposure, it can result in increased exposure to specific areas of the body.”

Page 340, Section 13
“The most effective way to reduce total exposure to RF is to avoid the use of RF-emitting devices, especially devices that result in the highest personal exposures such as mobile phones used at the head.”

Page 275, Section 10
“Given that the balance of evidence is for some adverse effect, even if that effect cannot yet be precisely defined, it seems reasonable to proceed with caution.”

Posted by Parents for Safe Schools at 20:56 No comments: