PLEASE DONATE NOW TO THIS VERY IMPORTANT CAUSE!

I rarely ask people for money. In fact, I have a very difficult time doing so.

In this instance, it is not difficult at all.  Please read the attached -- a story that affects us all in one form or another; it is condensed into one page of text.  This is a David v. Goliath fight with Edna and Marshall Pettipas facing off against one of the telecom giants in Nova Scotia.  How does that affect each of us, from around the globe?

The story is a universal one.  It involves a cell tower, a dream home, the family's health, and one big lie.

It also involves one giant success.  Bell Aliant, the defendant, lost in their Motion for Summary Judgment -- their request to have the case thrown out of court.  The judge has decided the case has merit and will be heard.  The Pettipas need money for experts, some of whom are coming in at reduced rates.  This money is needed by June 15. The Pettipas address and a PayPal link are included. If anyone from other countries has difficulty with the PayPal link, please contact Edna by email.

Many of you have newsletters, email groups, and websites.  If you would be kind enough to spread the word, I believe there is a chance the Pettipas case is one that will be heard around the world. Whatever anyone can contribute will be greatly appreciated. 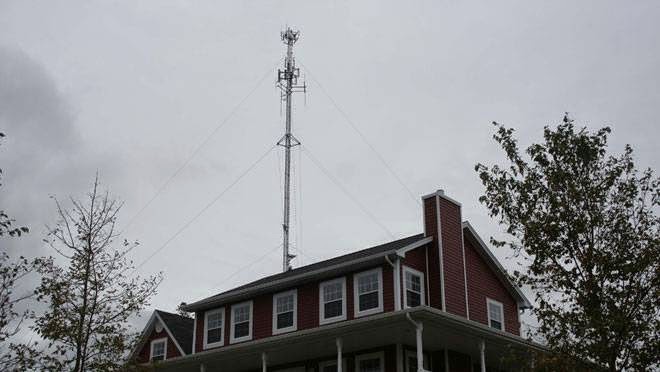 PLEASE DONATE NOW TO THIS VERY IMPORTANT CAUSE!

Edna & Marshall Pettipas, of Afton, Nova Scotia, are suing telecom giant Bell Aliant for loss and harm suffered due to radiation from a cell phone tower. Edna and her husband need tens of thousands of dollars to bring highly qualified experts to trial and they need to have the majority of those upfront costs by June 15! The Pettipas’ success could have precedent setting implications that will help every citizen of Canada, and in time, this case will have implications for other countries, as well. The greater public interest will be served as a result of the case heard around the world.

Edna and Marshall are up against a telecom giant with limitless resources.  Some of the experts signing on have offered to reduce their fees, but still the costs are extraordinary.

This is classic David v. Goliath and the Pettipas family needs your help.  They already passed a major legal hurdle when the judge refused to throw the case out on a defense request for dismissal.  Many similar cases have not survived this crucial test. Yet the Pettipas case is going forward and they need – we all need – your help.  Whether you can donate $5.00 or $5,000, your generosity will be greatly appreciated.

Donations can be sent via paypal:
https://www.paypal.com/cgi-bin/webscr?cmd=_s-xclick&hosted_button_id=4WA35A8J9F88S

No one should save for a lifetime to finally build their dream home, move in on Christmas Eve, and have to move out, in the very early hours on Christmas Day.  These are selfless people who are fighting a fight for all of us so that we and our children can live in a world where the Goliaths should not be allowed to lie about safety and rob us of our health and our dreams.

On the next page please see a photo of Edna Pettipas holding some of the documentation she has accumulated for her lawsuit against Bell Aliant Regional Communication Inc. and the dream home Edna and Marshall built.  The Pettipas felt intense pressure to lease the Property for placement of the cell tower. They were reassured by the Company that the cell tower would not pose any health concerns, except the possibility of falling ice. The cell tower company suggested the house to be built 300 feet away from the base of the tower, due to the danger of falling ice. When the Pettipas built their home they ensured it was definitely at least 300 feet away from the base of the tower.

The Pettipas eventually had to abandon their home due to ill health caused by the cell tower radiation.

Please, for Edna and Marshall Pettipas, and for your family in the future, donate today.

Edna and Marshall … and all who stand with them 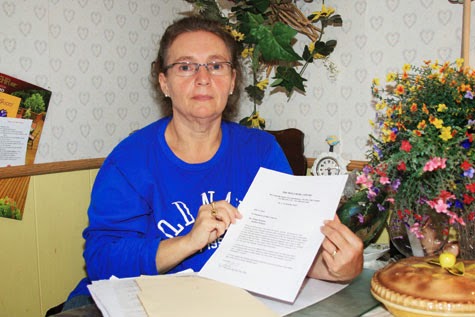 "It is essentially an unregulated experiment on children’s' health and learning. Microwave from wireless tech disrupts thinking – what could be worse for learning? Technology can be used more safely with wired devices that do not produce these biologically-disruptive levels of microwave radiation" said Cindy Sage, Co-Editor of the BioInitiative Report.

Two Scientists Break Silence on “Major Flaws” in Royal Society’s Recent Report on Safety Code 6
“The Royal Society panel has failed in its obligation to the public,” said Dr. Miller. “It ignored recent evidence that wireless radiation is a probable carcinogen.” Dr. Miller said he is most concerned about involuntary exposure, such as children exposed to
Wi-Fi in schools.

LOOKY HERE LADIES AND GENTLEMEN BECAUSE THE DEVIL’S IN THE DETAILS
We are talking about your kids, a trillion dollar industry that doesn’t give a rat’s behind about them, and school administrators that will do whatever they are ordered to do without batting an eye.

When the school district rolled out the Ipads this year, Aiden Fitchett noticed something new; as he did when seated near the wireless projector any time a teacher used one for a presentation: headaches. Bad ones. Bad enough that the 8-year-old second grader would come home crying from the pain.

Posted by Parents for Safe Schools at 21:46 No comments:

Teachers' Unions in Germany, UK, USA and Canada Who Have Done Their Research Do Not Support WiFi in Schools

Press Conference - C4ST Reaction to Royal Society Committee – Safety Code6 Review (4/01/14)
Since May 2013, C4ST has expressed concerns about the existing members’ financial relationships with companies, industry associations and lobby groups which are directly affected by the outcome of this panel review. In addition, four of the eight Expert Panel members have published material and statements demonstrating predetermined viewpoints that they don’t believe published evidence showing that humans are in danger well below the existing safety threshold published in Safety Code 6.
http://www.youtube.com/watch?v=YukgFRBAGt4

Teachers' Unions in Germany, UK, USA and Canada Who Have Done Their Research Do Not Support WiFi in Schools
What kind of liabilities are school boards prepared to bear, for knowingly putting children under unnecessary and involuntary exposure to an IARC Class 2B Possible Carcinogen?
http://www.safeinschool.org/2013/03/why-teachers-unions-dont-support-wifi.html

‘Kick out politicians who give students hazardous e-readers with unproven educational value’”
Today it is very difficult to be a teacher and take responsibility for teaching in the classroom where students’ cell phones are constantly ringing, text messages are being
sent back and forth, and surfing the entire time online or playing games through iPhones and iPads. All this when students really should be working on their school assignments.
http://www.emfacts.com/2014/03/is-wireless-technology-in-swedish-schools-adversely-affecting-the-kids/

The Lakeshore Coalition have been working with an environmental law firm towards development of a Class Action Law Suit on behalf of persons who suffer Electro-sensitivity and Electro-hypersensitivity.
http://www.buergerwelle.de:8080/helma/twoday/bwnews/stories/5555/

Posted by Parents for Safe Schools at 21:45 No comments:

SCIENTIFIC COVER-UP AT THE HIGHEST LEVELS

SCIENTIFIC COVER-UP AT THE HIGHEST LEVELS

IS THERE A SCIENTIST IN THE EUROPEAN COMMISSION’S SCENIHR
& THE WORLD HEALTH ORGANIZATION
WHO IS SUPPRESSING LENNART HARDELL’S SCIENCE?

In May 2011 the World Health Organization’s cancer committee, IARC, voted to classify the RF – EMF Spectrum as a 2B or “possible human carcinogen.”  Worldwide attention was once again focused on the possible cancer causing effects of RF (microwave) radiation, yet in the three years since the 2B classification, two divergent paths have been taken with respect to the science focusing on cell phones and brain tumors.

On one hand, the Hardell Group from Sweden led by oncologist Dr. Lennart Hardell published five more studies in 2013 – for the first time looking at over 20 years of data. As a result of these findings Dr. Hardell has called for an urgent upgrading of the classification of RF – EMF from 2B to Group 1 – a known human carcinogen. If IARC were to accept Dr. Hardell’s recommendation, RF – EMF  would then be placed in the same carcinogenic category as tobacco and asbestos.


On the other hand, there appears to be a back-room effort to ignore, denounce and bury Dr. Hardell’s newest science by two highly recognized groups, the World Health Organization and SCENIHR, the European Commission’s Scientific Committee on Emerging and Newly Identified Health Risks.

Susan Foster, on behalf of the UK’s Radiation Research Trust, has discovered that one man appears to be responsible for the attempted suppression of what is arguably the best epidemiological research in the world on cell phone usage and its correlation to gliomas and acoustic neuromas. This science could threaten a multi-trillion dollar industry; thus the stakes could not be higher – for corporate profits, yet more importantly, for the health of people all over the world.

In her letter of May 8, 2014 to the European Commission’s John Ryan, Acting Director of the European Commission’s Health and Consumers division, Susan Foster accuses SCENIHR of scientific misconduct. She further asks for a thorough review of the process whereby science was selected for SCENIHR’s Preliminary Report. SCENIHR had been given the charge of reviewing the present RF – EMF safety limits affecting over 500,000,000 European citizens.
“This is not ‘independence’ on SCENIHR’s part,” states Susan Foster. “This is scientific misconduct. SCENIHR is claiming to be something it is not, and hundreds of millions of lives are at stake as well as the ability to impact standards worldwide, albeit indirectly.”