Please support my request for a cellphone ban in our schools by sending this template or writing your own letter to Deputy Minister, Don Wright about your concerns.


Dear Deputy Minister, Don Wright,
I would like to show my support for Parents for Schools request for a ban of cell phones in our schools.

It’s clear that the constant use of cell phones is interfering with our children’s ability to interact and develop healthy relationships in the real world.  This addiction is robbing our children of the opportunity to build life skills that include critical thinking, communication, cooperation, and the ability to focus in the classroom.

Besides the negative impact this addiction has on learning, we are aware of the SCIENTIFIC FACT that microwave radiation exposure causes biological effects confirming the growing evidence of neurological effects and developmental delays in our children.

And now recent studies have proven that 90% of cell phones on the market today exceed the Safety Code 6 guidelines for radiation exposure (SAR at 1.6 W/kg at 5mm) when the phones are tested as they are used in real life.  Children attending school are pressing these cell phones against their heads and abdomens and storing them in their pockets when we know these devices are emitting up to 11 times over the current guidelines.

All these facts combined have only confirmed our concerns about the permanent health risks from the use of cellphones and personal devices in our schools.

We are asking for the BC government to follow Ontario’s lead and ban cellphones and personal devices in our schools.

We want to know why Health Canada, which administers, under the Radiation Emitting Devices Act, the sale, lease and importation of radiation emitting devices has neglected to do its due diligence by allowing cell phones to be brought onto the market without any practical/realistic-use safety testing?

We want to know why the manufacturers of cell phones are allowed to self report and only have to submit a sample of a one new phone to comply with exposure standards that has been set by the industry?

We want to know why thousands of children attending school are still pressing these cell phones against their heads and abdomens and storing them in their pockets when we know these devices are emitting up to 11 times over the current guidelines?

We want to know why BC Minister of Education, Rob Fleming has refused to follow Ontario’s lead and ban cellphones and personal devices in our schools, when his child is attending the only school in Victoria with a cell phone ban? http://parentsforasafeschool.blogspot.com/2019/10/we-want-to-know-why-bc-is-not-banning.html

The Chicago Tribune recently did an independent investigation into the cell phone scandal (Phonegate) and confirmed the findings that iphone 7 and other smart phones exceeded the Safety Code 6 guidelines for radiation exposure (SAR at 1.6 W/kg at 5mm).  Apple and Samsung are knowingly selling products that exceed allowable radiation limits and have failed to warn its consumers regarding radiation risks and the need to keep the phone at a safe distance away from the body.
https://www.phonegatealert.org/en/press-release-revelation-of-the-chicago-tribune-on-the-tests-of-the-most-popular-cell-phones-in-the-united-states

“The Chicago investigation confirms what the French National Agency has warned about for some time now that 90% of all the major cellphones tested (more than 450) emitted significantly higher levels of radiation exceeding the safety compliance standards, up to 5 times the current guidelines when phones are tested as they are used in real life. The current guidelines for the manufacturers is based on the 1990’s when people wore their standard flip phone on their hip in a holster about 1 “ away from your body.
https://www.phonegatealert.org/en/press-release-the-flaws-in-the-control-of-mobile-phones-by-european-and-international-authorities

In a recent study by Professor Om Gandhi, Department of Electrical and Computer Engineering, The University of Utah, Salt Lake City, he examined data from 450 cell phones and also confirmed that the phone can exceed the guidelines and emitted up to 11 times over the US FCC limit when used under realistic conditions.
https://ieeexplore.ieee.org/stamp/stamp.jsp?tp=&arnumber=8688629

France has asked the European Commission to strengthen the regulations and guidelines for new mobile phones placed on the market. As recommended by ANSES, the Government has requested that the certification tests be carried out in regards to the contact with the device, and not at 5 mm as is currently the case, so that they are more representative of the real exposure of users.  France also asked for an information campaign to encourage changes in ways of use, especially among children.
https://www.phonegatealert.org/en/french-ministerial-announcements-an-important-step-in-our-actions-to-protect-the-health-of-mobile-phone-users

Portland, Oregon passed Bill 283 directing Oregon Health Authority to review peer-reviewed, independently funded scientific studies of health effects of exposure to microwave radiation, particularly exposure that results from use of wireless network technologies in schools. The Department of Education will develop recommendations to schools in this state for practices and alternative technologies that reduce students’ exposure to microwave radiation that Oregon Health Authority report identifies as harmful.  "This 2019 Act being necessary for the immediate preservation of the public peace, health and safety, an emergency is declared to exist..."         https://www.emfsa.co.za/news/oregon-senate-bill-283-orders-review-of-independent-peer-reviewed-literature-on-health-effects-from-microwave-radiation/

The Italian court ordered the government (Ministries of the Environment and Education) to launch a campaign to advise the public of the health risks from mobile and cordless phones.  https://microwavenews.com/short-takes-archive/italian-decision-precaution

Why has the BC government willfully dismissed a 10 year study by the National Toxicology Program (NTP) that concluded “Clear Evidence of Carcinogenic Activity” and the association of cancer in the heart and brain and cell phone radiation? https://ntp.niehs.nih.gov/ntp/about_ntp/trpanel/2018/march/peerreview20180328_508.pdf

Why has the BC government willfully dismissed the Ramazzini Institute who also completed the world's largest animal study on cell tower radiation and confirmed the findings of the National Toxicology Program link to Cancer, even at levels below those allowed by SC 6?  This information accompanied with the over 29,000 peer reviewed studies by scientists and medical experts  www.emf-portal.org/en is more than enough evidence for the precautionary principal to be applied.   https://www.sciencedirect.com/science/article/pii/S0013935118300367?via%3Dihub

Health is a provincial jurisdiction.  Parents, teachers and students want to know why the BC government and the Provincial Health Officer, has refused to “act in good faith,” by fulfilling their moral and legal obligation, to protect our children, by taking measures to mitigate the risk of harm from unregulated cell phone radiation exposure while under their care in our schools?

Posted by Parents for Safe Schools at 08:47 No comments:

We want to know why BC is not banning cell phones and personal devices in our schools?

Ontario to ban cellphones in classrooms next school year

97% of the parents voted in favour of personal devices and cell phone ban in Ontario Schools.

Victoria BC - Transition to cellphone-free classrooms smooth
“They’re coming in and saying: ‘This is fantastic — my phone isn’t on my mind all day.’ ”

http://www.timescolonist.com/news/local/transition-to-cellphone-free-classrooms-smooth-principal-1.23009938
BC - Kimberley high school bans use of cell phones during class time
Students are expected to keep their cell phones in their lockers aside from breaks and lunch

New Zealand - Auckland school bans phones - and students are happy about it
No cellphones, no headphones and no laptops except for class work.

China bans mobile phones in classrooms
As well as forbidding students from bringing cellphones and tablets to class, the action plan asks teachers not to rely on electronic devices when teaching and giving assignments, and asks them to assign only written homework.

Rwanda - Government outlaws use of cell phones in schools
The Ministry of Education says that no more primary and secondary schools students will be allowed to own or use a mobile telephone at school, citing distraction.

Posted by Parents for Safe Schools at 20:24 No comments:


The First Report of 5G Injury from Switzerland

As soon as the antennas were installed, several residents and entire families in the heart of Geneva reported similar unusual symptoms of loud ringing in the ear, intense headaches, unbearable earaches, insomnia, chest pain, fatigue and not feeling well in the house. 29-year-old Geneva resident, Johan Perruchoud, called up Swisscom and was told that indeed the 5G cell towers were activated on the same day he began to feel the symptoms. When others called Swisscom they were told everything is legal and within guidelines.

5G WHIZ
Dr. Martin Pall: We know that the EMF impact the cells of our bodies, all the cells of our bodies by activating some channels. And when they do that, they produce all kinds of effects. And those include neurological neuropsychiatric effects. They include reproductive effects, they include oxidative stress, which is involved in essentially all chronic diseases. So I'm, I'm deeply concerned about the situation.

Five G - (2019 Documentary)
One of the problems with 5G is it can literally change human DNA, cause multiple cancers, plus hundreds more biological effects. Please spread the word and make sure your city is NOT installing these death driven towers near your homes and families homes.

Former President Of Microsoft Canada Frank Clegg: On Safety & 5G/Wireless Technologies
We need to spread the word about this untested wireless technology and demand the use of the safer use of wired technology

Two videos on the 60 Minutes investigation where US diplomats were attacked with electromagnetic radiation in their homes.
How do you report on an attack that you can’t see? 60 Minutes producers say they approached it with skepticism 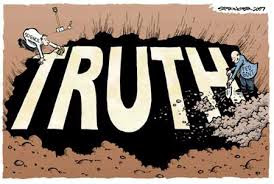 Posted by Parents for Safe Schools at 15:14 No comments:

Classrooms in Crisis, could wireless technology be responsible?

Educators at the Toronto District School Board, the country’s largest school district, logged 3,831 reports of workplace violence over the past academic year, up from 1,894 reports in 2014-15. In Edmonton, the number of violent incidents against staff members involving students documented by Edmonton Public Schools more than doubled between the 2015-16 academic year and 2017-18. At the Surrey School District, the largest in B.C., the number of reported violent incidents by a student against a staff member climbed from 190 in 2008-09 to 1,642 in the 2017-18 school year.
https://tinyurl.com/y499ku7m

Graph coincides with the installation of wifi in our schools. 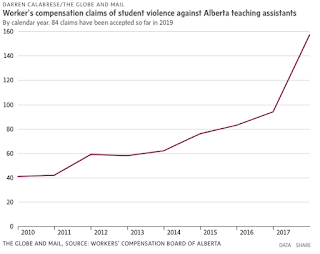 'I felt helpless': Teachers call for support amid 'escalating crisis' of classroom violence
Last year, the national organization compiled the results of a survey conducted for the Elementary Teachers' Federation of Ontario (ETFO). The online survey, which polled its 81,000 members, found that 70 per cent of Ontario elementary teachers reported experiencing or witnessing violence during the 2016-17 school year.  Verbal threats, physical assault and incidents involving weapons were among the most frequently reported, according to Brown.
http://tinyurl.com/y37nkhoj

Classrooms in Crisis: Verbal, physical, sometimes violent outbursts plaguing Oregon classrooms.
“When I first started teaching, I’d have maybe one or two students in the classroom with an unstable home life,” said 4th and 5th-grade teacher Cynthia Honma. “Now, I literally might have almost every child in my class.”
http://tinyurl.com/y4ukfq8a

'It's exhausting': parents, professionals grapple with child anxiety
One in eight children can be diagnosed with childhood anxiety, said Tammy Schamuhn, a child psychologist at Edmonton's Institute of Child Psychology, a rate she said has increased 50 per cent in the last 30 years.  "Our genetics haven't changed, so it has to be the environment," she said. "Something is changing in the environment that's causing this."
https://www.cbc.ca/news/canada/saskatchewan/childhood-anxiety-rise-technology-play-behaviour-1.4551445

BC Ministry of Education slaps a $8.8 million dollar band-aid on the escalating increase in classroom violence and mental health.  We need to find the CAUSE!
https://tinyurl.com/yy34trmf